A never-ending struggle, the new conquerors of the Golden Quadrilateral

Impacts de l'exploitation minière
Participation des populations
16 octobre 2016
ISF SystExt
In July 2016, ISF SystExt went to Romania to discover this country's mining realities. Our journey involved visits to mining sites (operating, closed or restored), enhanced with meetings with mining companies, academics and associations. The hard coal basin of the Jiu Valley, the copper deposits in Rosia Poeini-Geamana, the Golden Quadrilateral home to the suspended project of Rosia Montana. ISF SystExt portrays these industrial areas through three field reports, supported by bibliographic searches. Third (and last) part of the story: Certej, Rosia Montana, and the others… the new gold rush to the Apuseni Mountains 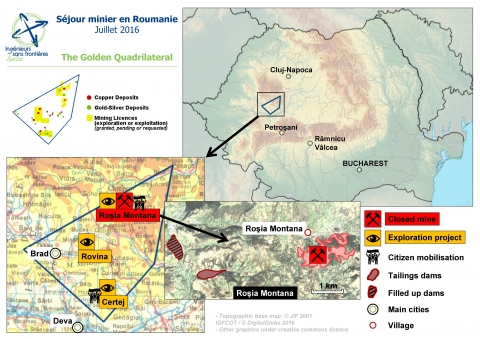 Located to the south of the Apuseni Mountains, the “Golden Quadrilateral” is a mining district boasting outstanding mineral wealth over 2,400 km². Although this area is mainly known for its rich gold deposits, it is also home to significant deposits of silver, copper, lead, zinc and even mercury. Mined for centuries, this metal-bearing region remains one of the richest in Europe. 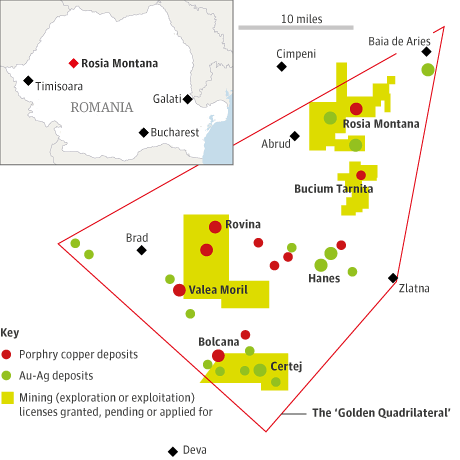 A history intrinsically bound to the mining of gold

The Golden Quadrilateral is among the oldest mining areas in Europe. Gold has been mined here since Roman times. Considered a European Eldorado at the beginning of the 20th century, the area experienced industrial modernisation but depletion of the most easily accessible seams led to a decline in activity soon after the Second World War. Under the communist regime, extraction of lower-grade polymetallic seams brought about a stepping up of intensive techniques (proliferation of treatment plants, foundries and open-pit mines).

A new gold rush to the Apuseni Mountains

Nowadays, the Apuseni Mountains are still the envy of many a mining operator. Since 1999, 150 permits have been granted for gold and silver deposits. Despite its status as a Natura 2000 protected area, six permits alone have been granted in the vicinity of Certej. Deva Gold S.A, a subsidiary of the Canadian company Eldorado Gold, holds the permits for Certej, Certej Nord, Baita Craciunesti and Mire, whilst the permits for Săliște Hondol and Troita Pitigus are held by European Goldfields Deva SRL. The total surface area for the six permits covers 4,865 hectares! The applicants have deliberately divided the land into several requests: small-scale projects stand a better chance of being accepted even though the potential impact is cumulative across the basin as a whole.

Mining concessions granted between 1999 and 2014 within the vicinity of Certej [Form a mapping tool of Mining Watch Romania, accessed in august 2016]

The Certej mining project is 80% owned by the Canadian company Eldorado Gold and 20% owned by the State-owned company Minvest. The deposit, with a grade of 1.8 g/t gold and 10 g/t silver, is due to be mined over a 16-year period. Eldorado Gold is planning deforestation in the area across 187 hectares and intends to set up two pits from which 48 million tonnes of ore will be mined. This ore will be processed with cyanide (cyanidation). Two dams are to be built in the Mare Bosca Valley for storing the mine tailings. Should they breach, the villages of Hondol, Bocşa Mică, Săcărâmb and Certej would be directly affected just as they were on 31 October 1971 when a tailings dam collapsed on the same mining site (at the time, operated by a State-owned Company), resulting in the deaths of 89 people.

With support from the mobilisation against the Roşia Montană project, the Certej project faces strong opposition both nationally and internationally. Backed by a petition of 11,000 signatories, Mining Watch Romania has denounced the operator’s construction permit as illegal since 2014. The Cluj-Napoca Court of Justice ruled in their favour on 22 July 2016. The permit authorising Eldorado Gold to begin the construction of infrastructure, particularly for the tailings dams, was nullified. But, only a few days after the ruling, local people witnessed the unlawful carrying out of these works.

Industrial mining in Roşia Montană began during the communist era. After the regime’s fall in 1989, the economic outlook deteriorated and the State-owned company Minvest cut the number of employees significantly from 1,500 to 800. The lack of profitability and pressure from the EU as part of its accession negotiations with Romania resulted in the mine’s closure in 2006. Yet, the remaining deposits are reputedly substantial: 215 million tonnes of ore with a grade of 1.5 g/t gold and 7 g/t silver.

The Dantesque project of Gabriel Resources

Since the turn of the millennium – and before Minvest had even shut down the site – Gabriel Resources was setting out plans for a new project. It founded the Rosia Montana Gold Corporation (RMGC) in which it has an 80% holding with the remaining 20% owned by Minvest. Over a 16-year period, the company is planning on a production of 314 tonnes of gold and 1,480 tonnes of silver. The chosen treatment process is cyanidation. To mine this vast, low-grade seam, four open-pit mines would have to be set up, ranging from 150 m to 300 m in depth.

Roşia Montană town center, poster of the mining company displayed on purchased buildings "Rosia Montana would not exist without the mines! Help up to preserve the mining traditions of the Apuseni Mountains!" - July 2016 [SystExt - cc by-sa]

The current village of Roşia Montană would likely disappear under the enormous waste rock piles generated by the pits. It is thought that cyanide-contaminated mining tailings would be stored in a huge basin (4 km long by 2 km wide and 180 m deep) that would completely consume a neighbouring valley, home to the village of Corna. The mining site would reportedly cover an area of 4,284 ha, requiring several villages to be demolished. Thousands of affected families would need relocating to the surrounding areas. To this end, RMGC has already built a new village 5 km away, as well as a new district in the city of Alba-Iula.

A fight on all fronts

Since the project launched, the mining company has set up in Roşia Montană. It employs local residents in exploratory work and asks them to tout the project’s merits, while it is busy buying up land and houses… It has reportedly even gone as far as hiring psychologists to persuade reluctant families to sell their homes. At the same time, supported by national and international NGOs, the organisation Alburnus Maior has launched legal proceedings and succeeded in having numerous permits invalidated. In 2013, the Romanian government approved a bill authorising the exploitation of Roşia Montana. The mobilisation grew even bigger: petitions were signed and festivals attended by thousands of people were organised. At the same time, dozens of demonstrations were organised across Romania with up to 20,000 people protesting in Bucharest alone. The government ultimately dropped the bill.

They won a battle, not the war

Today, Gabriel Resources has withdrawn from Roşia Montană, proving that it is still possible to win against the giants of mining and finance. Yet, a lot of the buildings and land still belong to the company. Local residents want to find an alternative to mining with greater emphasis on heritage and tourism but the spectre cast by mining still looms large. And if Alburnus Maior, Mining Watch and other organisations are still on their guard, it is because other mining companies might once again become interested in Roşia Montană’s gold.